At the dojo with Kimo sense and a lot of old friends.

Last week we had a short visit from Kimo Wall sensei. As always, it was great to see him. We’ve known each other for 30 years next year and have shared a lot together. He was my first sensei and I am still learning from him. He introduced me to Matayoshi sensei, Gibo sensei, and Liu sifu, and indirectly (through Matayoshi sensei or Nakasone san at Shureido) to Sakai sensei, Gakiya sensei, and my other teachers and seniors in Okinawa. We have traveled together and shared training, sweat, friendship and more than a few good meals over the years.  Every time I see him I am reminded of how lucky I was to have found such a good teacher to start this journey with.

He was only here for a few days but we got some good training in. We also got to spend time with a lot of old friends and training partners. Kodokan Boston is 25 this year and we have had a lot of people through the dojo in that time. Most of the folks for the first 10 years or so were from UMass, students of Kimo sensei’s when he was there in the 80s or of Giles Hopkins sensei after that. A few of those folks are still training, but most don’t make it to the dojo much these days. These are people who, like Kimo sensei, I have shared sweat, blood, and meals with, but whom I don’t get to see very often. One of the best things about Kimo sensei’s visits is that they come out to say hello. Sensei gets to see them, and so do I. It is great fun!

Of course we train together. Since many of the folks who come out have not trained for a while that training often consists of the subjects we did endless repetitions of back in the day. People have a good time, and we all get to reminisce about the old days. Sensei also spends some time working with the folks who are training on classical kata, application principals, body mechanics, and so on. It is all good fun. 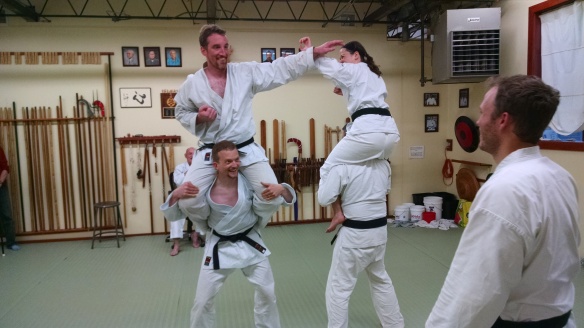 This seemed like a good idea when we were 20…

In addition to training we usually have a party of some sort, and spend time just chatting and sharing our lives with each other. This visit there was a lot of discussion of how training, whether one is still practicing or not, affects one’s life. Usually martial arts discussions center on the efficacy of technique, the physical prowess of the individual, the intensity of training, and so on. While there is occasional reference to the greater context of the practice, or how it is a “way of life” not a sport, this is usually a small part of the conversation. Not this time. Instead that was the main topic of conversation. Perhaps it was the demographic- there were a lot of people who are no longer training but for whom our karate remains a pivotal part of their lives. Since they could not talk about their current prowess or how effective technique x has been recently, they had instead spent time thinking about how training had shaped them and their lives and were sharing that.

It was good to hear. People like Kimo sensei, who has been teaching in the US since the 1960s, get to see the current crop of students but don’t often get to see how much impact they have had on the lives of people who are no longer in the dojo. It turns out he has had a huge impact on the lives of a lot of people. While we heard a few stories of people defending themselves the more striking themes were of character and self-knowledge. In many different ways people told of how their time training prepared them for bullies at work, for medical problems, for dealing with negotiations and managing subordinates, for all the various things life can throw at you. Of how deeply they were affected by the lessons they had learned, and how they were now passing them on to their children. And of how much they felt indebted to Kimo sensei for teaching them these lessons.

Calmness in the face of adversity, an ability to work hard and focus, and a sense that if something needs doing you should be the one to get in there and do it seemed to be what came up the most. As my friend Mike put it: “one of the first things sensei said was: ‘what are you gonna do?’. I use that every day at work. Problems come up and people sit around wondering who will deal with them and I say: what are you gonna do?” Other people mentioned phrases Kimo sensei has used around us for decades: “replace fear and doubt with knowledge and understanding”, “meet any situation without difficulty”, and the classic “you no be minus, you be plus!”, and talked about how these ideas had helped shape how they faced the world.  And made us all laugh.

It was gratifying to see Kimo sensei take all this in. It is easy to forget how much impact a teacher can have on someone’s life. Particularly when you don’t see those faces any more it is easy to assume that your impact is over. In some instances that may be true, but when a teacher challenges you, helps you push through and achieve things you didn’t think you could, and has something valuable and concrete to teach, that is seldom the case. That is one reason why hard training and attention to detail, personal effort, and most importantly character are so important in martial arts training. The technical results are of course important but often the most important effects of training are the less obvious ones, the ones that become part of who you are and how you approach the world. If your training is not challenging enough to change you, not deep enough to show you things you didn’t know were there, and not valuable enough to make you want to strive for it on your own, then your training is a shadow of what it could be. It takes a good, solid art to bring those things to the practice. But more importantly it takes a good teacher to bring them out in his or her students. 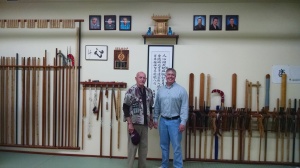 Thanks sensei. As always, good to see you.

2 thoughts on “What lessons are you learning?”