Karate training can take you in unexpected directions. One of the most surprising, and most rewarding, to me has been working with the other members of our dojo to keep our group training, growing, and enjoying our practice. This year our dojo is 25 years old. That is a bit of surprise in itself, as I was yet to be 25 when we started here! But it makes me very happy. 25 years ago I could not have predicted we would still be here now, or the ways our training has grown and developed over that time. I could also not have predicted how much the group of people we train with means to me, and how my life has been made so much richer for it. It is an amazing thing to be a part of.

I think history is important. It tells you where you have been. This is not just nostalgia. In something like our karate it is essential. It gives you roots; without history you have no base to build from, there are no giants to stand on the shoulders of. If you pay attention, history also gives you lessons; if you know where you have been you don’t have to go back there unless you want to. That may seem like a simple idea, but as we say here: years of training are meaningless if you do the same year of training over and over. Without knowing your history you can just keep repeating it, never getting anywhere. History also helps you understand what has shaped you, which can give you a sense of both who you are, and who you want to be.

Demo at the Museum of Science in 2002

Kodokan Boston’s history is pretty simple, but at 25 it does deserve a few words. We started here in 1990. A few of us graduated from UMass Amherst that year. I left the area and spent the next few years in Japan, and traveling. But here in Boston Mike Piscitello knew he didn’t want to stop training just because he had moved away from the dojo. He found some former members of Kimo Wall sensei’s dojo living in the area- Scott McGaunn, Henry Bennet, and David Nauss, among others- and they started training in parks, backyards, and Mike’s parents’ basement. And that is how we got started, because Mike wanted to keep training. Not a very dramatic story, but a very good beginning none the less.

A few years later Corey Tedrow and Lisa Pomiansky moved to the area, joined the group, and realized we needed a consistent space to train. They searched for one and in 1993 found Green Street Studios, in Cambridge. We spent over 14 years there, and it was a great place for us. A lot of people came and went in those years, including me when I returned in ’94. While we missed bag sensei, and Mike’s dad’s olives, we made some good friends at GSS. Along with our daily training we had a great time doing demonstrations with the dancers (classical martial arts, it turns out, create a rather different atmosphere than most modern dance pieces) and were lucky to get to know, and learn from, a community of artists as dedicated to their art as we are to ours.

Training continued, and kept changing and growing over the years. Eventually GSS was no longer the right space for us. We spent about 2 years training in parks and rented spaces again until David Nauss moved his business and we took part of the space as a new dojo. David helped a great deal with the build out and of course with getting the dojo there in the first place, and we opened in late 2009. It is great to have bag sensei back in the room, and to be reminded of all the support our art has from those around us every time we train. The support and assistance of our entire community, and the effort everyone put in to make it happen, really cemented in my mind that it was the right move for us. It was huge step, and has been a fantastic home for us since.

Looking back on 25 years there are a lot of people we could thank for helping us get here- Mike for knowing his training was his responsibility and starting the dojo, Lisa and Corey for pushing us to take the next step and have a formal group, David for helping us get into our own space, and our teachers for sharing their knowledge- but the most important group of people are the folks who come to the dojo to train, and all those who support that training in our extended community. So many names come to mind- Per, Tania, Scott, Charlotte, Bryan, Mike, Vu, Karl, Amy, Jan, Jim, and so many more. There are too many to mention, and they have each made an indelible imprint on our group. For 25 years they have been what we are really about, what our mission is for. 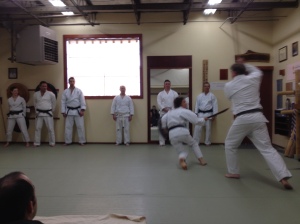 Friends and Family Demo at the dojo in 2014

And for all the changes over the years the mission of the dojo has remained the same- train hard, train often, and make our training part of a life well lived. Of course our training is not exactly as it was 25 years ago. If we were still training the exact same way that would have been a lot of wasted time, and that is definitely not what we are about. But we are still training our Goju Ryu and our Kobudo, and have added Feeding Crane into our practice. We still maintain our connections to Okinawa and our teachers, and we keep learning, and changing. In short, we still work to take charge of our own training. And that is the real history of Kodokan Boston- people working together to keep themselves growing and learning. Taking charge, and care, of themselves. Hopefully we have kept the history strong, and used it as a base to build from. Given where we have come from I for one am looking forward to the next 25 years. I know I can’t predict exactly where we will be, but I do know we will still be training together, and that Kodokan Boston will still be growing and changing 25 years from now. And I know that is a history worth being a part of.