Do you wear a traditional keiko gi to training? When I started training that question would have seemed absurd; of course all traditional karate-ka wore a gi. But these days things are different. The current trend, dare I use the term “fashion”, is for “real” karate-ka to leave the keiko gi behind and train in tshirts, shorts, and other workout clothes. Some note the lack of keiko gi in pre-WWII training and suggest that they are harkening back to an earlier time. Some say they want to train in clothes that more closely approximate what they would wear on “the street”. Some say it is more comfortable and does not inhibit movement. And some note it is less expensive. While these reasons are all good I can’t help but think that part of it is also that the most visible martial artists today, MMA folks, train in workout clothes. It could just be they are setting the unconscious cultural standard for tough guy attire, and the keiko gi, as seen in strip mall dojo across the land, seems more like clothes for children, not for real adults really working out.

Is the choice really this,

We usually train in keiko gi in my dojo. Amusingly enough (to me) I get occasional guff for it. “Oh, you still wear a keikogi? OK.” Don’t get me wrong. We also train in workout clothes, especially when we are out in the park where I feel the keikogi draws unnecessary attention. (Another reason, I know…) And I never wear a keikogi when I am working out alone. That would feel weird. Certain elements of training in workout clothes I really like. I do think they inhibit certain movements less. They are less expensive, and can be more comfortable. Best of all, you don’t need belts with them, and that is a real plus to me. I have seriously considered abandoning at least the gi top and having “official” dojo attire be a tshirt and gi pants. But I have not, at least not yet.

Why? Well, if I showed up to formal training in one of my teachers’ dojo in Okinawa wearing a tshirt it would be considered inappropriate. I think that should mean something to me. It may just be habit, but my teachers are not fools that just blindly follow tradition. It occurs to me there might be reasons for it. Karate is an Okinawan budo, and if we want to follow that path we may want to consider that what can seem like trappings may have a little more content than it at first appears.

Yogi sensei was just relaxing with us.

So why the keikogi? I think they do a variety of things. First, they are a uniform. Uniform means “all the same.” So when you come to the dojo and put on a keikogi you are symbolically becoming the same as everyone else. For the time of training, just a karate ka, just a member of the dojo. Wearing workout clothes allows for a variety of other symbols- your most recent vacation, how much you can spend on fancy gear, your work, the seminar you alone went to. Even worse, products you endorse, the trivia of our material culture. These symbols can be used to draw attention to yourself as different from everyone else as opposed to yourself as part of the group working together to train. Separation, joining, these things are important. Therefore these symbols can take away from training, on a very subtle level.

The uniform is also a symbolic reference to what you are doing. When you are wearing it you are declaring yourself to be separate from the rest of your daily life. It tells both you and everyone around you that you are engaged in a special and specific activity. That can, I believe, help create a separation from daily life in the dojo. While in uniform work issues, family life, worries, hopes, concerns are all put aside to focus solely on the task at hand. On top of that the austerity of the uniform is a reminder that what you are engaged in is not trivial or for show. Do you need a uniform for that? No, but symbols can have power, especially subconsciously. On some days making the mental shift is difficult and the uniform can help. It can also help others treat you as nothing but a karate ka, to expect you to be in that mode. That in turn can reinforce the role to you.

Finally there actually are some technical benefits. I have torn tshirts completely off people doing grappling or throwing. Keikogi tend to be pretty durable, at least decent ones.

But all in all I just keep coming back to it being part of our martial culture. That may not be a great reason but it is one with some emotional import, at least to me. I also keep thinking about what the keikogi adds instead of what it is taking away. If we ever do change to workout clothes here I would want to keep the symbolic referents of the uniform intact. A simple, austere tshirt with nothing except perhaps a dojo symbol on it. Not too expensive so when they got destroyed they could be easily replaced. Everyone would have to wear it, defining them as members of the dojo engaged in their chosen activity. No mélange of various colors, cuts, and symbols. Just a simple tshirt. A keikogi, really, just in a different shape.

We could lose the belts though, which would be awesome. 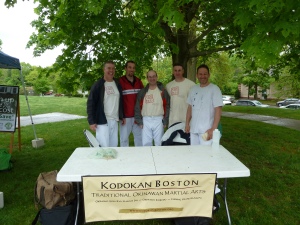