Lots of thoughts about my teachers these days, and the simple seeming idea of lineage, of the passing of information from one person to another. I remember sitting in the budokan in Okinawa with Gakiya Yoshiaki and Yogi Jyosei. A group from the Midwest was visiting the island and were asking about kobudo training. One of the first questions Yogi sensei asked was who their teacher was. When he didn’t know that person he asked who his teacher’s teacher was, trying to understand their connection to karate in Okinawa. That got resolved (it was a pretty distant connection) and then Yogi sensei asked who they were training with. They were visiting a number of dojo during their trip and Yogi sensei bluntly asked them why, what they were hoping to do. They answered, essentially, visit, see some different things, learn what we can from different teachers.

Gakiya sensei was pretty quiet during all this but Yogi sensei got rather animated, and started a short lecture on having a teacher. He listed a number of reasons to find a sensei and focus- you don’t really get much from a teacher until they get to know you, you can’t really move forward unless you get a strong foundation, you need to learn and develop good manners and behavior, you should be developing strong personal relations. (These last hold far more weight in Okinawa than most people understand.) The group essentially yessed him but were happy to hear that he and Gakiya would be willing to teach them some kobudo, starting the next day. As they were getting ready to leave one commented to me that “the Okinawans are so obsessed with lineage! Who cares who your teacher is, isn’t your skill the issue?” Gakiya caught the look on my face, and asked me what they said. He and Yogi had a quick back and forth in hogen and Yogi looked at me and said with a smile: “I want to know whose fault it is. If your teacher is no good it is not your fault, and we can help you fix that. If your teacher is good, it’s your fault and there is probably nothing we can do.” 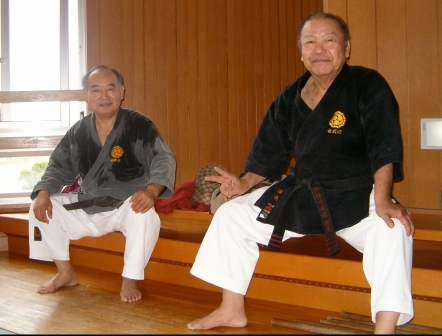 Indeed. Your teacher, your lineage, doesn’t give you anything by itself. A good lineage is just a chance. If you don’t have a good teacher, at least in a traditional art with a deep foundation, you simply don’t have a chance to access the system. It isn’t your fault. Of course if you do have a good teacher and you are rude or have poor skills, if you have a chance, then whose fault do you think it is? I can’t do Yogi sensei’s impish smile, but if you know him I will let you picture it.

4 thoughts on “And Whose Fault Is That?”